I love pinterest. Who doesn’t? So when I reached about 20 weeks pregnant I started planning my nursery. However I’m also a frugal… OK, cheap… person. I found so many awesome things on Etsy but everything was so expensive! So I got out my craft box and hit hobby lobby with my 40% off coupons.

The first thing anyone does when planning a nursery is pick a theme. I chose adventure because my husband and I are so busy that we never have time to take vacations but we go on little day or overnight trips all the time. Adventure turned out to be a great theme for A because in his first 2 months of life he had been to Texas, Maine, Vermont, NY, and Mississippi and rode on 8 different planes (and did great!). Anyway, I’m going to talk a little about how I decorated my nursery on a budget with DIY projects.

Our house isn’t huge, the room isn’t very big so I opted to not get a changing table. Instead, I chose to get a plain white dresser with a changing pad on top. I put non-slip tape under (commonly used for carpet) that way it keeps the changing pad in place and does not ruin the top of the dresser. We also chose to splurge a little on the recliner. If you are really looking to save money, get a glider, I wanted something really comfortable because I knew i’d be spending a lot of time in it. I did end up sleeping in it for about a week when I brought him home. I’ll talk more about that later.

So some of my projects were on the more difficult and time consuming side and some were super easy. I wanted a nice display over the changing table where I could hang a DIY mobile. So I started with that. 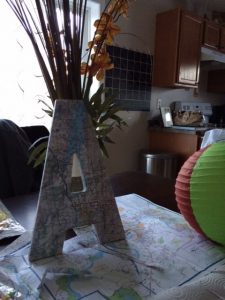 2. DIY Mobile: Also easy. The circle is the inside part of a cross stitch loop, which you can get at any craft store, walmart, or amazon. I’ve heard of people using paint samples that you can get at lowes for free. I had peel-and-stick colored paper so I used a circle cutout and
stuck two circles back to back so that you can’t see the kite string. However, they did not stick very well so I ended up having to hot glue the circles together around the string. 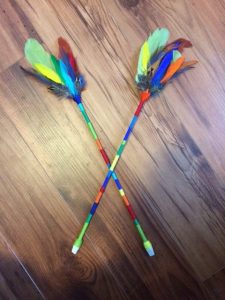 3. Arrows: I found these online for like $40. I made them for about $10. Feathers, string, wooden dowels, pencil eraser, and hot glue (I looooove hot glue). I simply used the hot glue to attach the feathers to one end and the eraser to the other end, then wrapped the dowels with different color string.

My shelf was pretty much done. I added a DIY star garland decoration which i made with kite string, the peel-and-stick paper with a star cutout. Same process as the mobile. I also bought a metal airplane from hobby lobby and a clock from target. finished product at the end of the post. Next I started some more difficult projects.

4. Teepee: Next was the teepee. I remember telling my husband I wanted to build a teepee. He gave me a puzzled look and said “you want to BUILD a teepee?” When it was done, he was pretty excited about it. I used [this] tutorial and adjusted it. I wanted to add some nice trim which I got at a local fabric store and sewed on. 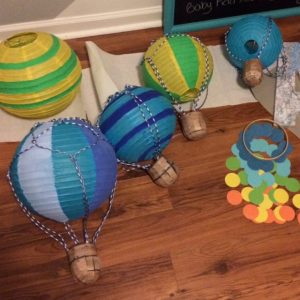 5. Hot Air Balloons: The hot air balloons were a bit time consuming. I started with paper lanterns and painted them so they resembled hot air balloons. I used [this] tutorial to tie the string and [this] tutorial for the baskets (minus the handles). I used hot glue to keep everything in place. The clouds were quicker- just two pieces of white felt cut out to the shape I wanted- filled with stuffing and hand sewed with a blanket stitch. They were hung with kite line and hooks 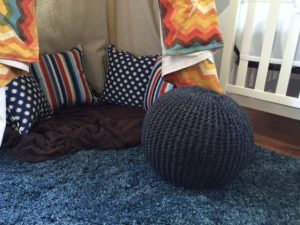 6. Compass: The compass was made with a wall decal. I cut the design in half and cut out the middle so that it would fit around the light. The toughest part about this
is standing on a chair, pregnant, with my arms in the air rubbing the decal so that it sticks… thought my arm was going to fall off.

7. Pouf: The hardest part of the pouf was that I didn’t know how to knit and I couldn’t find one at the store for under $80. So I hopped on youtube, typed in “how to knit” and taught myself. I used [this] tutorial, however I found that it did not come together at the ends as well as the tutorial described, so I knitted a little square that I sewed into the open areas. If I had to do it again, I would have knitted a “magic circle” (you might have to crochet that) because it would have fit better in the circular opening. I was not even a week away from my due date and my husband was gone to Texas at this point, so I kinda just wanted to be done with it.

So here is the finished product, hopefully it gave you some ideas! What is your theme for your child’s nursery? Comment Below! 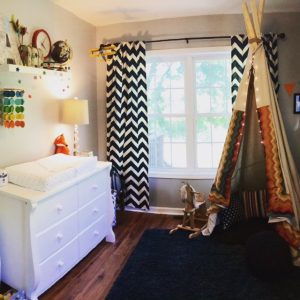 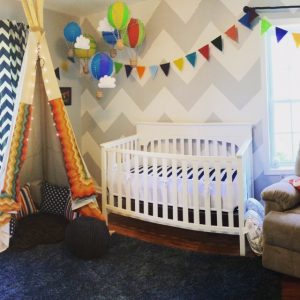 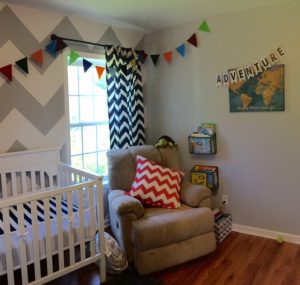 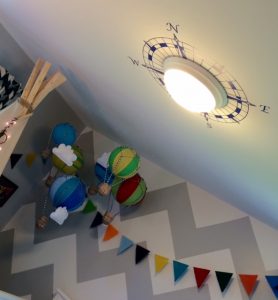 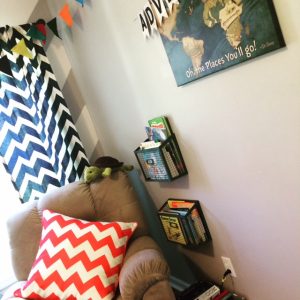